Let me start by bidding farewell to Steve, if you steal our regret rating at your new job, we will find you.

Let’s get started, Mamee. The offerings from Malaysia have been touch and go, and these were a good example of why we are typically indifferent about Malay Ramen. 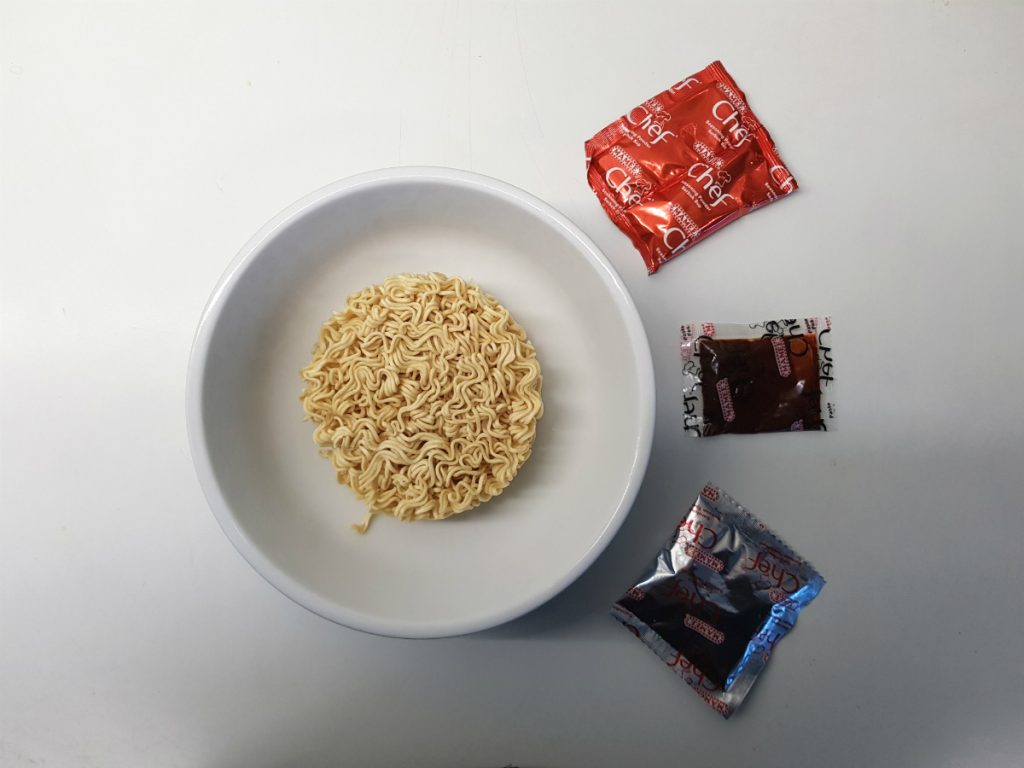 The inclusions are ample, there are add-ins galore a good start, a round noodle block for a round bowl is also a fantastic touch. A bag full of either coconut or head lice (I gather it’s the former not the latter) adds a good touch of coconut throughout the dish. The noodles themselves? Maybe I didn’t cook them for long enough? Perhaps my water wasn’t hot enough? but after a 5 minute soak, they still seemed barely cooked and barely carried the flavour.

Heat wise, there was a tingle, next to nothing 90% of the dish but the tofu seemed to hold the chili hit, weird. These a getting a good but let the record show that I think these were fantastic in flavour, I just would have liked a lot more heat.

I regretted these a little, the poops were forced and it made me push harder than a lady in the 6th hour of labor. There was no sting or pain it was just a lot of pushing. I feel I may need more fiber in my diet.

It’s been a while since we reviewed the cup version of these babies; we actually thought they were pretty good! Not high on the heat though. The packet version holds up pretty well; nice flavour broth (but the noodles really don’t hold much of it), albeit a bit of a grainy mouth feel. Low heat, pleasurable taste. I can see why we rated these “good”. I think I actually preferred the cup version though as these aren’t wowing me as much as they did.

So the evening went pretty well; I did have some poops that were hard to push out, but nothing that interrupted my evening too much. The next morning I did have a rapid and smooth exit too so if anything these jut backed me up a bit

Here we go something curry! I made these babies first and I regret doing so, I had to find out the hard way that the hot water machine was broken and had to walk up to the next level and back just to get hot water! At first I thought the “tofu” was some sort of bread but I was advised otherwise by Kam.

I made this dish and actually thought it was made wrong because it looks like vomit while also looking half decent, I got dug into this dish and I was sadly disappointed there was next to no spice in this dish I wouldn’t even call this a curry dish! but once I had one of the”tofu” bits I was hit off my chair by a mouthful of spice that caught me by surprise.

All day after eating this dish i was letting the farts off left, right and center it wasn’t pleasing at all! i got home and was sitting down to start playing some games and bang it hit me, felt like I was holding in the MOAF (Mother Of All Farts) so I went to the toilet just in case, and thank god I did, it come out like the blitzkrieg of craps fast and deadly, once I wiped there was no more!