Yes the taglines are terrible right?

So we haven’t had the pleasure of reviewing Mamee yet; and for our first one we have a delicious sounding Curry Laksa! Opening the package we get a lot of goodies; two seasoning sachets, dried vegetables (and tofu!) and some kind of laksa paste. All up makes for a bit of excitement here.

Cooked up the dish looks fantastic; not much to the smell though. Noodles hydrate well as do the vegetables, and the noodles seem to hold the flavour very well; but here-in lies the only issue. There isn’t much flavour. I mean, these taste good, I like them, but I feel there could be some more to it. 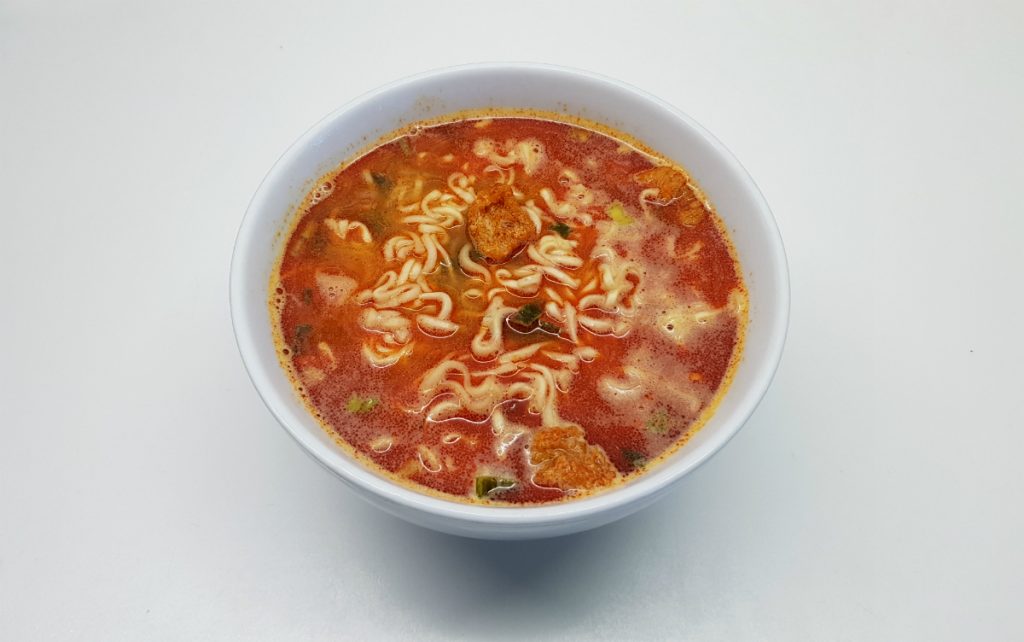 Not much heat with these babies, but overall I was pleased with the dish. Looked good, tasted good, just wish there was a bit more laksa.

So interesting story; Josh and I got super hungry again not long after this and I just told him about KFC’s new ‘Tabasco’ fried chicken. Basically KFC marinade their chicken in tabasco sauce then deep fry it in their crispy succulent coating. They also had this $5 lunch box which has 1 piece of succulent Tabasco chicken, 1 wicked wing, 1 regular chips, 1 potato and gravy and a Pepsi Max. We bought two each. It was delicious.

The reason I tell you this as this was a grave error; we immediately regretted eating all of this food and our body felt the same way. About 2 hours after consumption (and that entire time feeling lethargic, sore and ill) I was glued to the bowl for a good 20 minutes attempting to force out all of that succulent succulent colonel. Maybe succulent isn’t the correct work when it’s making it’s exit. I was hating myself. I’ve had enough KFC to know when regret is “KFC” regret, and when its nood regret; this was KFC regret.

I followed up this morning with a fast, greasy, slightly stingy poo. This was also more KFC regret. Will I ever eat KFC again? Probably.

0 flames; all of this was the Colonels doing.

Mamee? Like Mama but not? Let’s have a look here, lots of sachet’s of bits, a plentiful helping of what I’m pretty confident is coconut power, lots of veg, tofu on surface level these look amazing.

Noods are thin standard cup version, never a favourite for me but I’ll forgive. The flavour is good, not great but good. It seems to be lacking… something. Maybe some salt? Wasn’t there a sachet of coconut? why can’t I taste that? It has some large-ish slices of chilli but somehow little to no heat. I came away satisfied with this cup-o-noods but still, find this to be a little lacking. Good but room for improvement.

As Kam has said, Many poos shot out of the anus. It was greasy, it was stinky, it was Chicken shits. KFC Chicken Shits to be specific. I can’t even evaluate the regret of these as a result. I regret the Chicken, a lot. Delicious Chicken Shame. So regret for this is null and Void

0 Flames. Much regret was had, whether it was nood related or chicken related, We can never be sure.

However, we were soon to discover that there wasn’t a whole lot going on beneath the surface, unfortunately it seems this Mamee is all show and no go. The cup was.. warm, and there was plenty of texture, but not alot of flavour or heat, and dammit, when you see Laksa, you expect heat! All in all the dish was just okay, nothing noteable, nothing to write home to Mamee about.

This lack of heat did translate to a lack of regret, it seems my counterparts have only the Colonel to blame for their fecal failings.

0 flames, go for it if you don’t want a whole lot of fuss.

Since we screwed the pooch on this one Steve is the decider. Sorry guys, we needed colonel.