Samyang back. The Classic Buldak flavour meets curry flavour yet again, this time meeting in the bowl of deliciousness. I am a big fan of the curry variety of fire noods, feel free to take a look at our last stab at these in packet variety. A lot of the same compliments are extended to the bowl Variety with the convenience of a bowl. 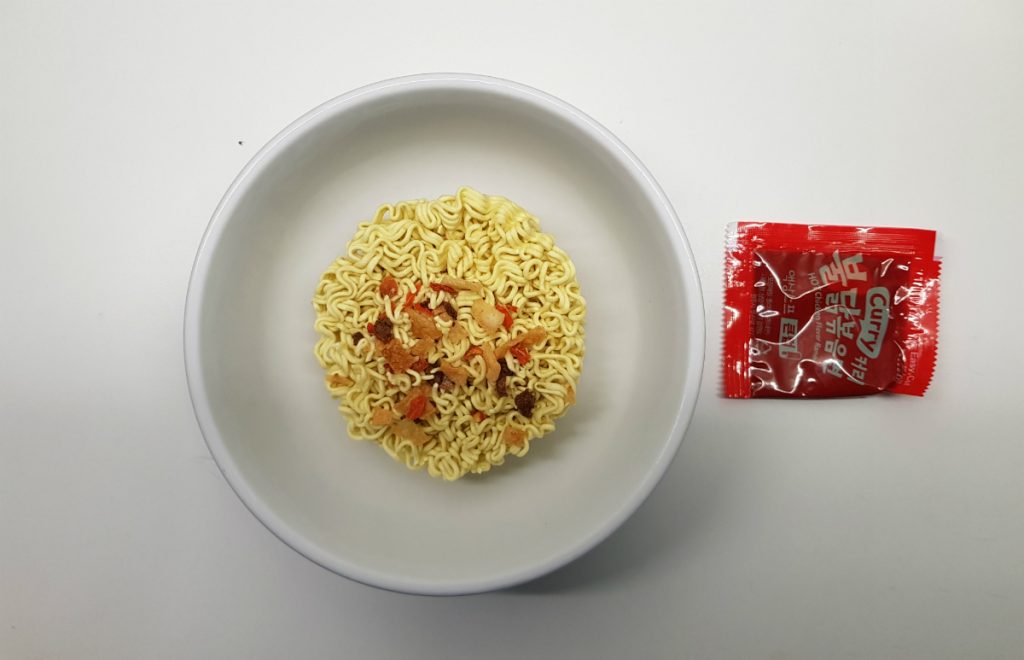 The inclusion of veggies that would find themselves at home in your standard curry is a great touch, the thin noods for faster cook time is a bonus for your short work break. Samyang ticking all the boxes here yet again.

The heat was there in spades, high heat, leaving a tingle meaning if you are in a call centre environment, eating between calls poses a few risks. I can safely say yet another delicious and high heat contribution to add to the list.

I wouldn’t say it was regrettable, but I took some force to vacate my bowels. A lot of pushing to get things started. That being said, once the ball was rolling, there was no stings, no pain and my bum feels as good as ever.

1 Flame for the inconvenience of having to push.

I’ve actually had the packet version of these a few times since our review; I am quite the fan of these. Josh managed to find the bowl variety so of course I was down for a new review!

These things still have the same great flavour but a slightly thinner nood style to allow for the quick-snack style of cooking. Not terrible noodles but I really do prefer the thick packet style ones. Heat was crazy as usual, nice pool of sweat on my head and stingy lips for a good while after. Real authentic curry taste too. Still a fan of these, even with the lackluster noodles.

Not a regret in sight! This was a pleasant experience from the taste, to the evening that followed. No stingy poops, maybe a fart or two but I do fart sometimes.

I was happy to see another offering from Samyang on the table for this review, and they have knocked it out of the park as usual. Well-constructed bowl, nice thin noods for fast cooking, and a delicious taste to round it all off.

The heat levels for this are high, so be ready for an extended sting and a bit of sweat after eating, but the tasty curry flavour and roughage(dried potato!) will keep you mowing down.

Regret wasn’t a massive factor here, only a bit of curry-poops the morning after with low sting.

1 flame if we’re being pedantic.

Oh Samyang; again and again you show us just how possible it is to make super spicy noodles that don’t wreck your anus. Well done!