Here I am covering for Steve, because he doesn’t have the time to do a review!

The noodle block is a small block, and very thin noodles but they manage I guess. Here we have 3 different packets of goodies! 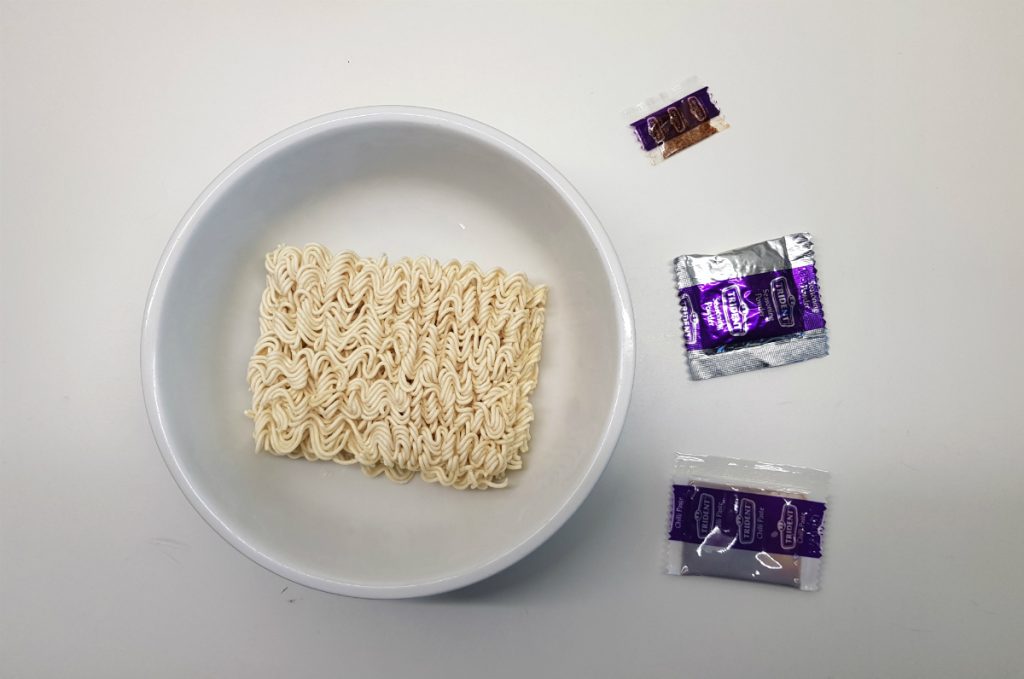 Now this is kinda confusing; these noodles tell you to make it as a soup, and then if you like you can pour out the water and flavouring?!?!?!?! We recommend not listening to the packet for this one, because making it as a soup is the way to go! This hit me with more heat then I really expected (not as hot as the Carolina reaper that I ate last week) but i would say it gets a “Medium” heat for me but the other dudes disagree so I’m outranked again!

What the F*ck is that josh? wheres the flavour?????

AKA the right way!!!

Holyyy Sheittttttt, was I farting a lot last night or what, whole train ride home I was popping it off, had to sit by myself as to not alert anyone to the farts that were occurring, got home and this continued all the way up till about 12 at night!

Then this morning, god damn half way through my train ride to work, the stomach churn happens, feeling as though I was going to erupt. I had to make a choice; get off the train and head straight to the toilet and be late to work, or wait it out and go at work.

I held out and went to the toilet at work, and it was Vin Diesel (fast and it was furious)! Over and done within 4 minutes but was it a wild ride!

These are the most confusing packet instructions ever; it literally says to cook them as a soup style noodle (with the flavouring in the water), and then if you want, you can drain all the soup and just eat the noodles…wait, so waste all that flavouring if we want to eat these stir-fry style? If I wanted flavourless noodles I would eat flavourless noodles Trident! No. You have given us the option to eat these stiry fry style but we will…our own way. We decided to make this a la Mi Goreng.

Ok I changed my mind; way too salty. I added water again and had these broth style; much better! These are actually pretty good! Not very spicy but a solid citrusy flavour; very Thai. I’ll say it; I’m surprised. I thought these would be shit; shit they are not.

I don’t know about the other guys but it was smooth sailing for me not a poop in sight!

A very large portion of me wanted to opt out of these noods. I felt Trident wouldn’t be worth our time. I knew the “Hot and Spicy” flavour would failt to meet expectations that come with the name. I went for a stir fry-esque version of these noods. Cooked Cake, Mixed the sachets seperately, added after cooking and draining noods. My technique made things quite salty. My sodium intake for the day has certainly been exceeded.

The Flavouring was surprisingly decent, a nice Lime/citrus hit. Heat wise, there really wasn’t alot brought to the table, but I was expecting this from the get go. The mass market is not the place you find genuinely hot/spicy ramen. I was pleasantly surprised with Trident, I thought it was sure to be a let down of a lunch. Sometimes, it is nice to be proven wrong.

I’m not sure what happened here, I pooped A LOT. Like an Alarming amount of fecal matter exited my body. There was an after work visit that included what seemed like days worth of build up, impossible – I’m a bi-daily pooper. Then another trip 3 hours later to finish the job that apparently still wasn’t finished. There was no pain, no push, just a lot of doo-doo. Morning after, normal morning bog. Last night was just quite alarming, I wish I weighed myself before and after.

4. An alarming amount of poos came out.