It’s been a long time, I missed thy noodlies. Kam has been teasing me with these ones for quite a while now. From what I’m being told we’re all just blaming Josh for getting this one out so late so I’m going to go with that also: fuck you Josh!

Anyway, let’s get down to this reviewing business. I freakin’ love everything about Samyang. Even just holding the packet in my hand is stirring up some undisclosed desires.

OK let’s see what we got here; n00d block is HUGE, again I prefer the round option, this still fits easily however the quality is again on point – nice and girthy. 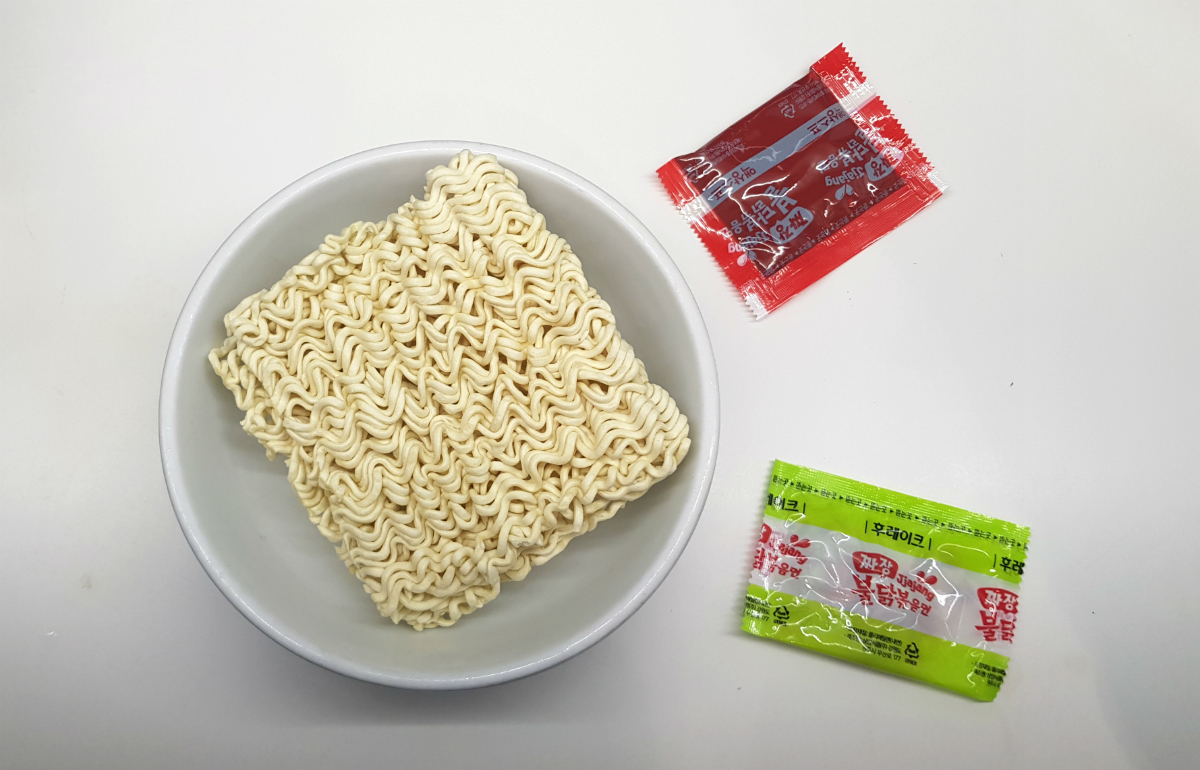 Included you also get the bean sauce and some dehydrated spices / veg. This sauce looks like black death. Pure blackness and very consistent but you know deep down it will unleash the pits of hell. Once mixed up and prepared the aromas hit you right in the face – the customary mouth watering proceeds as you’re rushing the dish to the table to consume. 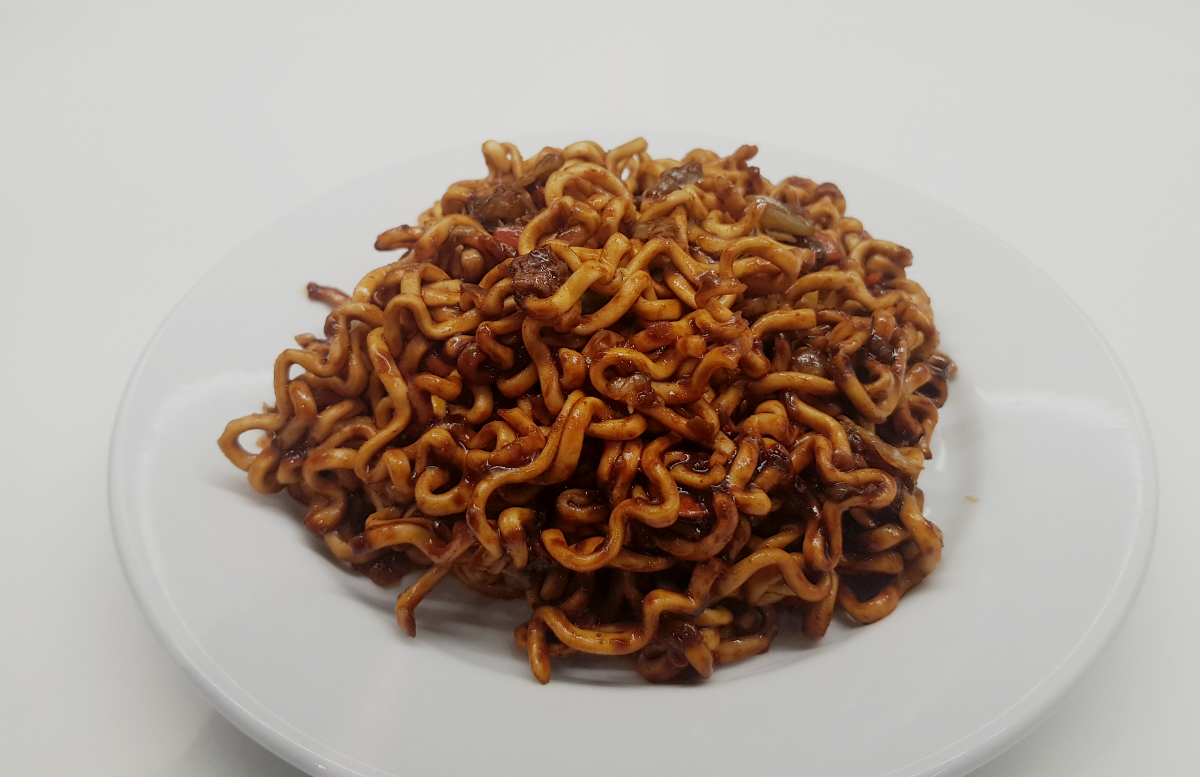 GODDAMN these are tasty. Black bean sauce don’t really taste like “black beans”, you can definitely taste the soy however the overall flavour is super good. Now this is where I fucked up, the taste was so amazing and it’s been so long since I savored in Samyang’s goodness that I forgot the heat factor: sure, there was some heat during consumption but I was eating so fast that it felt like I was defeating the devil, was almost thinking to myself “pffft this heat level is only High”. I was EXTREMEly wrong – straight after swallowing the last bite the punishment began – lips were burning intensely and my whole mouth was on fire – was trying to hold a conversation with a colleague at the time and they definitely noticed the drips of sweat travelling down my nose. 10 minutes later and the heat finally started subsiding. My tip is to savor these in more instead of smashing – heat is nice during consumption!

Nothing major to report here. Got some pretty mean heartburn due to the spice I guess I only regretted this as I trying to work out as I was belching fire. Had to make a prompt throne visit as soon as I got home, bit gluggy and stingy but no spray / need to push extremely.

3.0; I was tired and had to run up the stairs to the throne so got a bit puffed.

You thought we had quit didn’t you? Nah; we are just lazy…that and it’s hard to source noods we haven’t already inserted into our mouths.

So Josh actually found these babies about a month ago; the problem with Josh is that he is extremely unreliable and never brought them into the office. I waited about 4 weeks before i decided to go and buy some of these for myself just to make sure they were brought into the office! Problem solved right? Nope. It;s Josh. He proceeded to keep bringing packed lunches to work. I feel like he hates me. Or maybe he ain’t about that life anymore.

Anyway, I’m a big fan of the fluro-puke packaging. Unsure why they went for this to represent their black bean variety but I ain’t mad; I could take this to a Bush Doof and wave it around at the DJ, then strap them to my back when I leave and make it home safely that night. I could probably even use these to help direct air traffic. Samyang always coming with the multi-purpose packaging; I like it.

You know what else I like? These noods! Again, not sure why Samyang can’t decide between round or square blocks (round! Go round!) but the noods are of high quality as always. Great spring when cooked just the right time and a nice snap to them. And what of the sauce? What of it? It’s dark as hell’s abyss. It screams “suffer me” and it delivers pain in spades; to be fair the black bean flavour is very brief for me; it hit a little at the start and then it was just scorching pain. But I like pain. The black bean does, however, linger quite pleasantly after the meal is done. I’m enjoying the after-burn and the the lingering flavours of the far east on my tongue leave a smile on my face. Let’s hope my bung-hole is smiling tomorrow too!

Well, I had a bit of a false alarm around 9pm in the evening; a little rumble I thought may turn into something explosive. Fortunately the eruption never materialised; it was more of small tremor than a wide-scale eruption.

The only disturbance I really noticed was with my regular morning dump; there was a slight sting and a consistency not unlike a chocolate thick-shake. Whilst not without a noticeable change from the norm I would rate this very low on the shit-ctor scale.

I found these quite a while ago, I was immediately excited and thought I’d share with Kam, only to them forget to bring them into the office for almost a month. This obviously got tiring for some, and low and behold, Kamran came in with his own packs of ramen.

I thoroughly enjoy the refreshing change in sauce colour, a soul-less black instead of violent red was a nice little change. Noodles are top notch as we come to expect from Samyang and the flavour is… good.

I thoroughly enjoyed these noodz but couldn’t say they were the most remarkable flavour. They were that great balance of swert and spice with a little black bean goodness.

Initially felt these were probably the mildest of the line up but boy oh boy was there a build up, I found myself having to take a few breaks, maybe I’ve gotten weak, maybe I’m just not as tolerant of the spice life anymore, it’s probably me. Taste for me was good probably great but not as mind blowing as say the cheese or OG Packs were on first taste.

Aftermath was a tough one, being on a medication time out I was as clogged as a dunny on a building site. It pushed through, once the motion got going, it was pretty smooth sailing. I had to wipe a lot though. I think I need to invest in a hose for my butt.

1 for the frustration of wiping.