So I saw these puppies at a Korean grocery store; the packaging immediately stood out to me because it’s one I have never come across in my travels. It looks fun! Nongshim have been pretty good to us and I’m always a fan of Korean Spicy Chicken ANYTHING. So buy them I did. 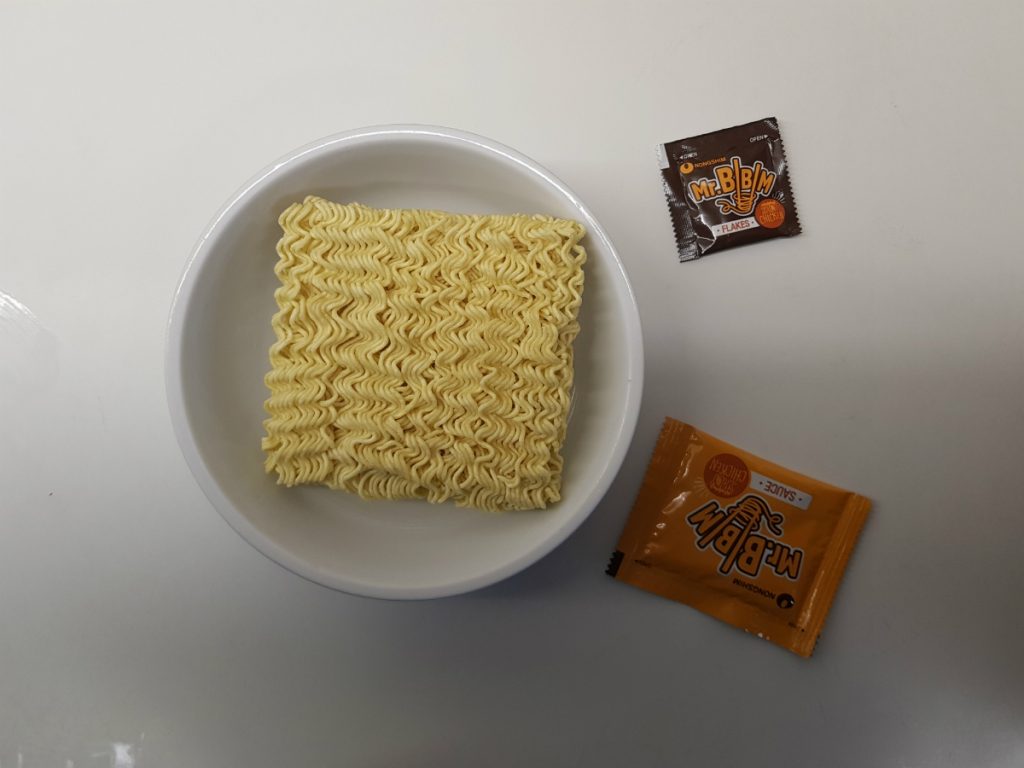 Nood block is pretty standard fare; to be honest I was expecting a thicker gauge. Didn’t take too long to cook and the texture is pretty good so no mark down there. The sauce is a thick, dark, deep red. Oh that’s always a good sign! 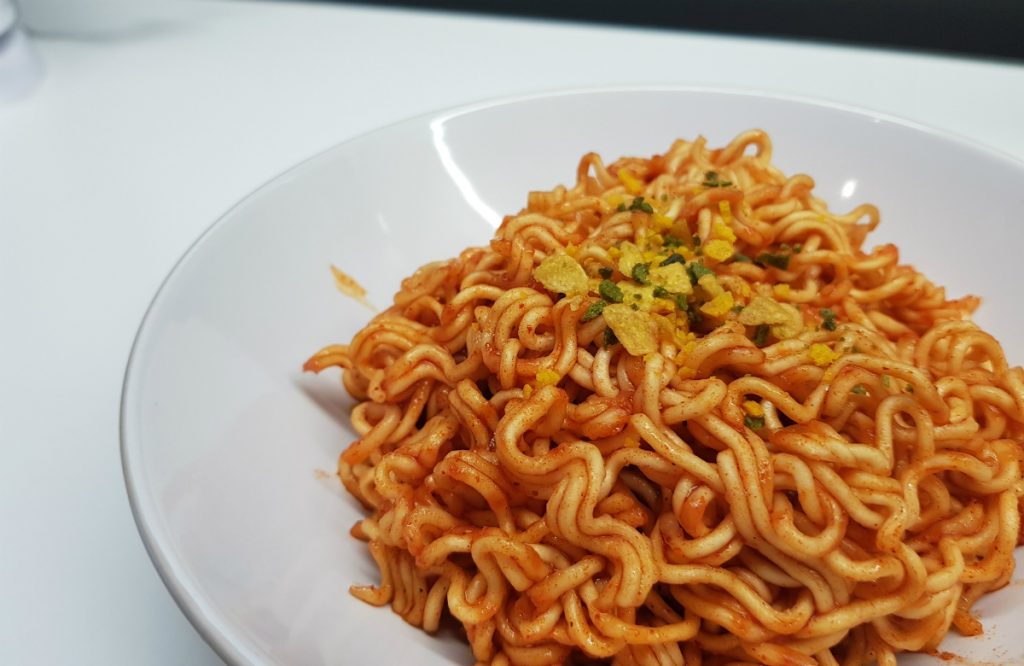 Mixed up these smell sweet. Not quite what I was expecting. Let’s give them a taste!

First impression; more sweet than spicy. Oh wait…no there it is. It kicks right in the back of the throat. Half way through and I’m realising these are more of a sneak attack with the spice. Sweat is profusely dripping as I eat (and even continued to do so a good 5 minutes after I was done!). The flavour was alright; nothing that really wowed me but I would eat it again. I didn’t get too much chicken, just mostly a sweet tang, and a lot of heat.

These could do with a little toning down of the sugar, and a boost in the chicken department (maybe even kick in a little more heat for us daredevils!). Then we would have a real gem.

So that evening all was well until I felt a little movement and warning in my lower abdomen around 8pm. Off to the loo I go; had to push a little. No sting though. But it was definitely a bit of “hey what did you put in me?” going on in my belly.

Nothing else happened the whole night…the morning however did result in another little “Oh hai remember me buddy?” And a shot out quite a sludgy stream of stuff. But no sting! Odd….But not too bad actually.

3 flames; you are going to have a bit of panic in the evening but the good news is it results on only a 15 minute time out. Should be safe to plan your night around that.

Not sure what happened with my appetite, I just wasn’t hungry. I didn’t eat with the team, in fact, I ended up having these for dinner. Discussing with Kam as I ate via messenger. Cook time was good, I could have cooked these in a commercial break. The noodle block Was a little underwhelming. I feel when we are doing spicy noodles the thicker the better. The more the surface area, the more sauce to coat, the more impact of heat with each mouthful (that makes sense right?).

Sachet wise, I feel these have taken a leaf from the Buldak; 1 sauce, 1 bag of bits. The sauce in the kind of red that makes you question your life up until the point of consumption and a sweet aroma. Now, when I am eating, I like to be able to not have to read the packet and still know what flavour I’m getting. If I didn’t read that these were Korean Spicy Chicken flavour, I would never have known. Very little chicken flavour to be sensed.

They weren’t wrong about spicy though, these have a hit. It’s been a minute since my last bowl Fire noodles but from memory, this is in the ball park. We discussed that this would be high heat but I would like to mention this is a HIGH, high. I’d almost say this borders the extreme.

I had a great movement morning after. Granted I haven’t seen out the time as my colleagues but this was a breeze. No sting, no pushing this was great.

I took a moment to actually read the ingredients in the package of this, and saw the word soy about 10 times so instantly I thought this was gonna taste like a soy mess I was not incorrect; personally I think it tasted just like soy but Kam seems to disagree with me like with everything else. (Kam: Josh disagrees too).

While making this dish I opened the sauce package and I clearly said to the people around me “I don’t know why I do this”. The sauce gave me that instant death feeling in the stomach; and as poured it out on the noods I wasn’t feeling that much better.

Overall they were pretty good, I’d have them again! The heat wasn’t overwhelming but you wouldn’t want to eat this if you didn’t want to have some spice in your meal, the taste was everything I read it to be pure soy or sweet AF.

I had nothing in the way or regret like not even any farts that i would usually get, overall a good dish!

0 flames for the sub par farting

Well well well; is this the first time someone other than Samyang has claimed a coveted ‘Seal of Approval’? I think so! The heat on these was just high enough to put it in the running. It’s not for the squeamish and there is nearly no regret! Well done Nongshim. Well done. And everyone ignore Nic.