I’m running out of jokes here and every yo mama joke has been done thousands of times by thousands of people.. Kinda’ like yo mama.

No one does spices like Mama. These are always fun to review due to the sheer number of spices/tastes their noods contain. Un-packaging these bad boys shows a super small noodle block and two sachets, one with a blend of spices and another containing blood death sauce; both had an awesome scent I might add. 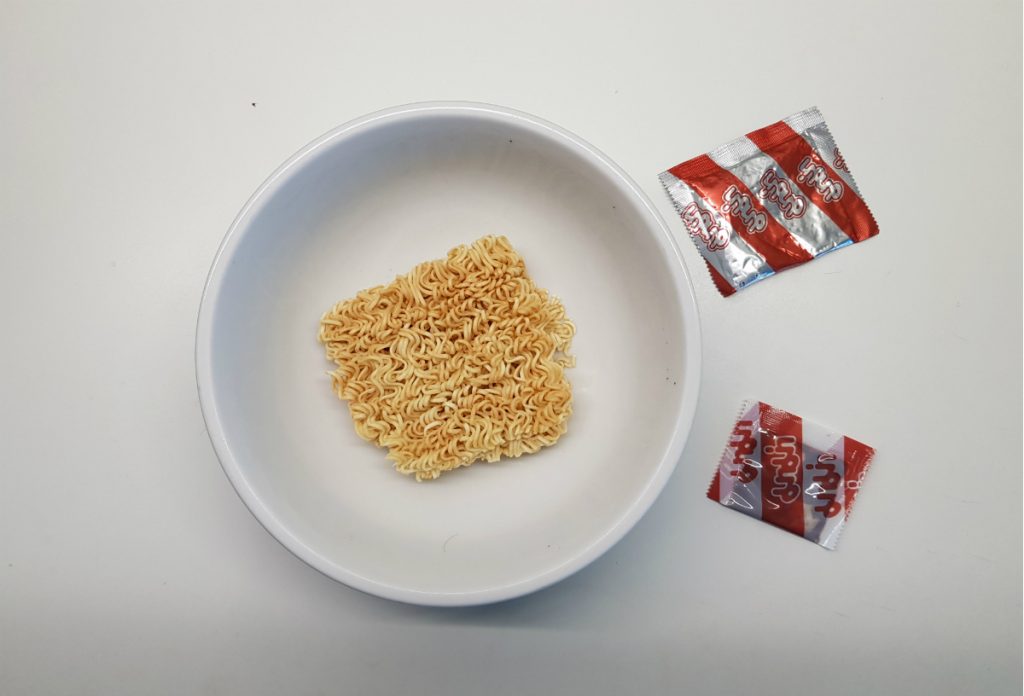 As soon as you mix everything up, the aroma hits you right in the face and then just keeps getting better. Despite the noodles being thin and a bit starchy, the flavor more than makes up for it. Could definitely taste shrimp at first but as you keep consuming these you then get the spicy tomato taste then finishes off with a tangy spicy lime. Lime was a tiny bit overpowering at the end but the solid medium heat complemented this wonderfully.

Heat kept going a little while post consumption, not too fiery but definitely left a tingle on the lips and tongue! 10/10 would eat again!

Hmm odd, normally broth noodles open the floodgates; not these ones, I felt a slight sting in the lower abdomen in the late evening however nothing came of it. Visited the throne this morning, bit of ring sting but no major regret.

So this is one that was sent to us from a reader/fan/superfan in Darwin (thanks Ja! :D); Mama have had a pretty good track record with us so I was excited to try these! Best gift this year!

As usual, noodle block was a bit small but WOW what a great scent! Initially detected shrimp flavour but that soon subsided amongst the citrus tones and what tastes like tomato. Heat was very present and there is a LOT of mouth sting with these. The sting stays with you for quite a while. I would say its one of the highest ‘Medium’ ratings we have had. Fantastic dish! Good choice Ja; please send more!

Ok so these ones killed me in the regret phase; that evening I was letting off gas like a broken pipe. It was crazy. It was smelly, loud, and at times a bit bubbly. Around 9.30pm I ran for the bowl because the stomach cramps got unbearable; copious movements and quite a bit of ring burn. Unexpected. This happened twice last night.

The morning seemed OK; until about 10am where I had another similar movement; gas buildup and cramps told me it was gonna be another rough ride and it really was! Toilet brush was required and if I wasn’t as fast on my feet as I am maybe a new pair of underwear would have been on the cards too!

Mama, back with another knockout. Flavour is seafood-y, I think we agreed on shrimpy? Even with my hatred of seafood flavouring I was happy to eat these. A nice lime hit make these little guys a refreshing yet spicy little snack. I must emphasize that this is a snack; Noodle cake is tiny. If you’re looking to fill your belly, 2 packs will be needed.

Heat wise, these have a bit of a kick; sniffles ensue. It’s not overbearing but I would like to note that it has some staying power. The lips and tongue will tingle for a while after the bowl is cleared.
Mama, your flavouring team are doing great things, your noodle cake team need a bit of a talking to.

I’m starting to think maybe my tum is the problem. Have to start eating yoghurt or some shit. This also gave me the Hershey squirts. Not as bad as the last few and I guess my bathroom trips are a lot shorter now but boy I miss the feeling of relief after a solid poo.