More of a snack than a meal, these pack a lot of flavour in a small package  for the ramenite who is chasing a light(er) lunch, all in the convenience of a cup shaped……cup.

Although the great flavour should have been unsurprising, these are brought to you by the makers of Shin Ramyun. So the dish is a delicious, tomato/beef flavour, with a hit of enough spice to keep you interested and those tastebuds dancin’. 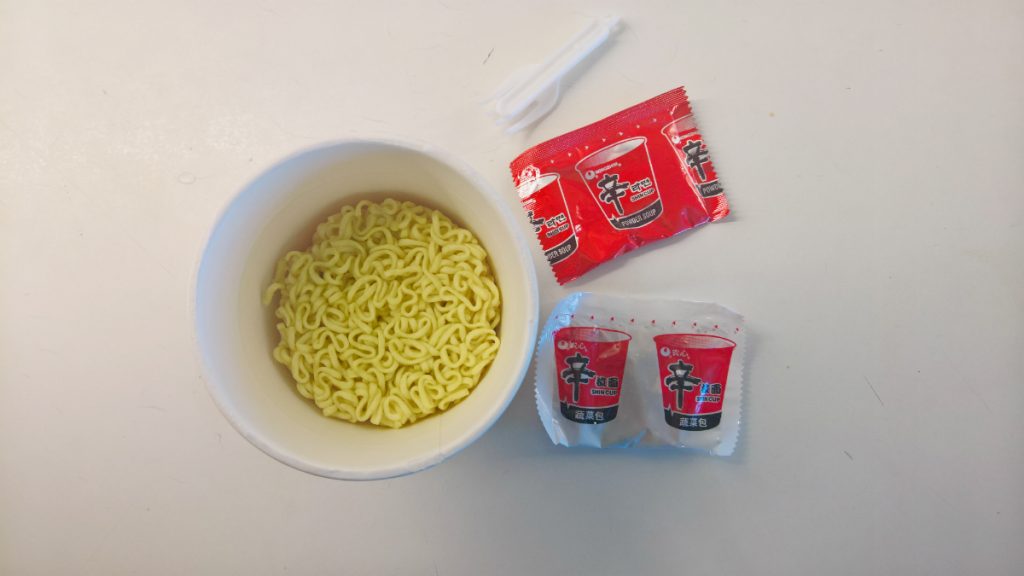 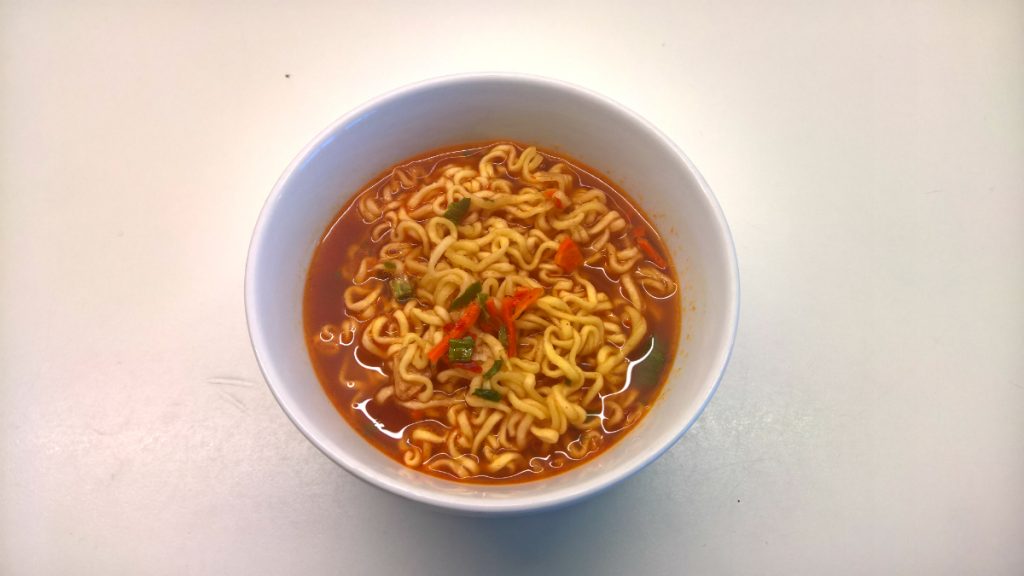 As expected, the noods have vegetables galore, and the smaller size of the ramen means the noodles hydrate quicker, and the disposable fork all adding to the on-the-go nature of this cup’o’yum. Would grab again.

Regret-wise had a wee punch to it, the next morning generated some urgency to get to work, with a quick dumper finishing off the morning poops.

4 flames, might cause an accident on the way to morning ablutions.

Nongshim is a Korean company, Shin Ramyun is a Korean ramen, but these cups are actually made in China; it’s a conundrum. We ended up classifying these as South Korean because these are not a Chinese noodle manufacturer and these are not solely available in China. Categorizing is hard work but look at it this way; Volkswagen are made in South Africa now, but no-one calls them a South African car.

I ramble too much; OK so I love the packet version of these noods so I’m keen to see if the cup is just as good! That being said I remember the regret from the packet variety so I’m a little nervous.

The noods themselves were a little thin – understandable as this is a cup noodle – but the flavour was not lacking; delicious spicy beef! Heat was a solid medium keeping the tingle on my tongue, lips, and outer mouth for the entirety of the meal (and a little bit after). Fantastic stuff!

So the evening was pretty tame; no issues. Morning was another story! I sit here at 9am still holding one in after just taking a trip to the toilet. It was fast, loud, and stingy. Gimme a sec I need to go back….OK I’m back. That was fierce. Short, explosive, stingy; it painted the back of the bowl and the brush was required for some cleanup. Look, last night was pretty safe so these are OK to eat before a night out but the morning is going to be painful.

5 flames; not as bad as the packet variety but there is some regret.

Shin Cup.. Sounds like hybrid protective gear for soccer. Don’t think that would play out well… Anyway back on topic, noods in a cup, hell yeah(?). Not going to lie, I was not expecting much from these, noodle block looked small, designed to fit the cup and sachets looked average.

Boy did these surprise though! Taste was delicious, good heat during nood consumption and even more whilst sipping on the broth. The Shin Cup has delivered!

Not much regret for me, a bit of discomfort prior to soccer went away quick. I allowed a bit more time in the morning also for these to cause some havoc but all smooth sailing.

2 flames for the uncomfortable car ride to soccer