A browny liquid with a reddish coating of oil on the top.

This nood gives a great first impression upon opening the packet; 3 packets of flavour and a good-sized noodcake in a large bowl. Mixing is simple; dump everything in and add hot water! The noodles cook really quickly so you’re off to a flying start.

The broth is an interesting albeit delicious one – a browny liquid with a reddish coating of oil on the top – and you will want to mix this one fairly frequently while eating to avoid oily overload. The noodles don’t hold a lot of juice and could have done with a bronze die in the machine for more texture.

The broth is great; a spicy, chickeny meal – great for a cold day. I did struggle with the temperature; it was a hot day on a floor with f-all aircon, which makes for a sweaty, sweaty ramenite!

There wasn’t much of an aftermath for me, despite the warning signs of chilli oil and a definite kick of spice, I managed to escape any carnage on the day and beyond some stinky, stinky farts – and a numbing of the butt following the morning ablutions – I came away pretty scott-free.

2 flames, you may need to apologise to coworkers the next day.

Man Josh is missing out! He picked these puppies too! Ah well; don’t be sick. So these things are fantastic! Noodles are very quick to hydrate (lending to their thin gauge) and I found them satisfactory at holding flavour. The broth was to die for. This was delicious; strong stocky chicken taste, hefty seasoning (but just right) and a curious little pang of heat. Very hearty. Loved it.

Okay so about 4.30 and I had stomach cramps; headed to the loo and it was a slow hard push. No sting. Was there about 20 minutes until deciding I was done but the cramps remain. This one was a quick mover! So again at 5 o’clock I head straight to the toilet; still at work! This time its a watery movement that comes accompanied with a painful sting around the rear. I clean up and head back to my desk; even though it’s wiped clean I can still feel the burning. I haven’t even left work yet.

I already regret every part of my existence; 8 flames easy.

Here I am again guest reviewing because peeps keep calling in sick! I loved the look of the n00ds in soup, constantly changing colour it was different to your standard soup noodles. This was most probably caused by the massive amount of oil that comes with the stuff

The n00ds aren’t the greatest at holding the flavor but we all had our suspicions that the broth holds all the goods and boy were we right, first sip was the nectar of the gods and it kept getting better; until you got to the end and then you are met with rice puffs? And pure salt.

Oh my god, this thing went through me like a nuclear rocket, roughly 3 o’clock i was clinging to the toilet firing that bad boy into the nether regions of the toilet bowl, after the first time i didn’t go back all night. 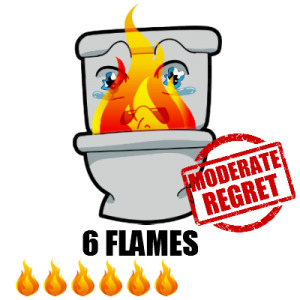