So my better half just got back from a trip to her home country of Indonesia; this time she remembered to bring back some tasty noods for us to review! Problem is, she only brought two of each instead of three. Ruh-roh! It’s OK though; Josh and I will tackle these international goodies!

So this one I have no idea how she got across; any customs officers reading this please note that I did tell her off. This one contains real meat! HUZZAH. So exciting. I hope I don’t die.

So Telur Balado is an Indonesian dish; it’s what it says on the box. Hard boiled Quail eggs in a sort of Garlic Sambal. Looking at the box ingredients there is actual quail egg in here; Is egg a meat? Not really; a technicality I guess but I feel the ‘real meat’ moniker is misleading. Let’s review! 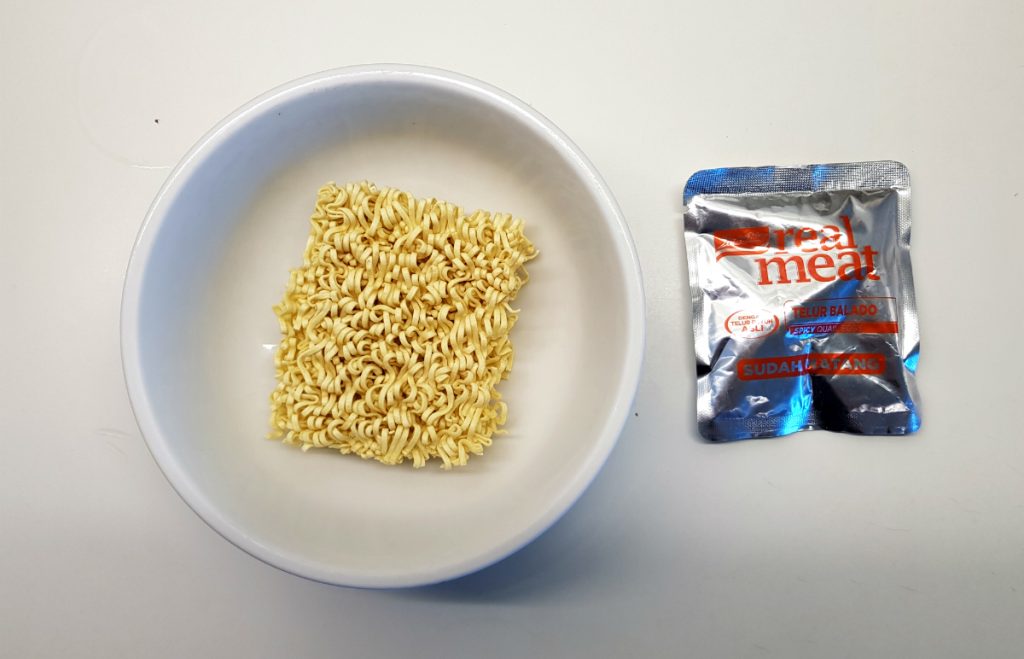 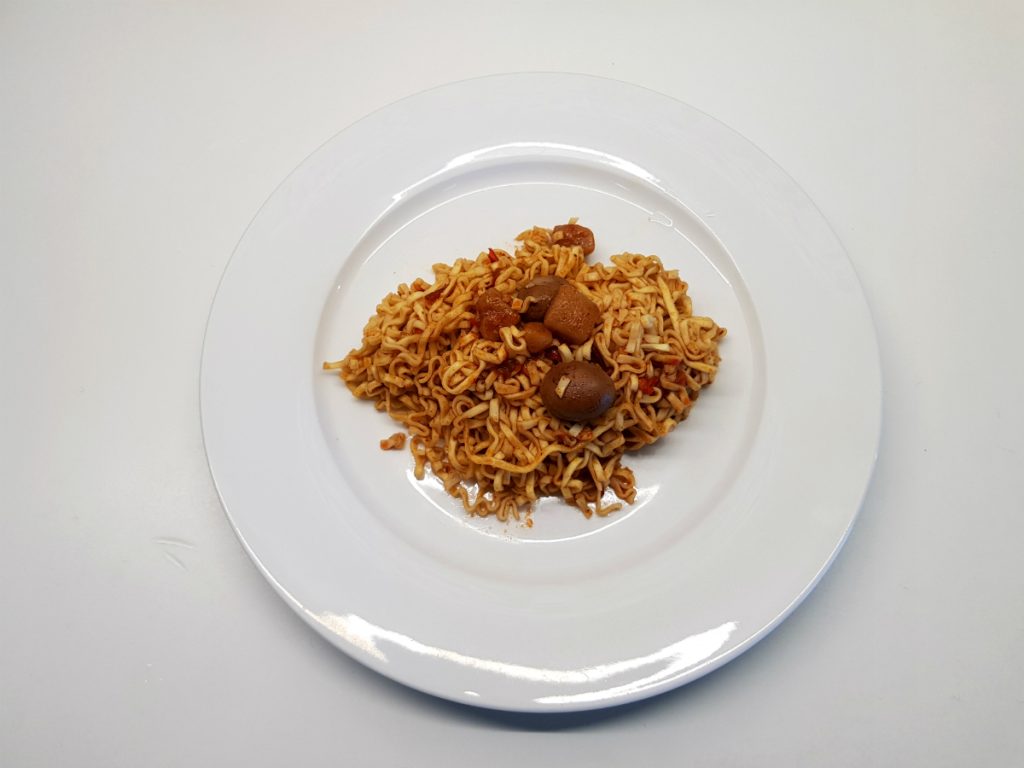 PLOP….a second quail egg….I’m already regretting this. Out plops two pieces of what I think is potato….And we dine…

Oh god no; the first thing I tried was that Quail egg. The texture on the outside was kind of like a bouncy ball and the inside was a bit like chicken stuffing but more chalky; it tasted disgusting. the noodles didn’t taste much better; just tasted like chilli…but with less flavour. The potato was actually alright though. The only redeemable aspect of this dish. 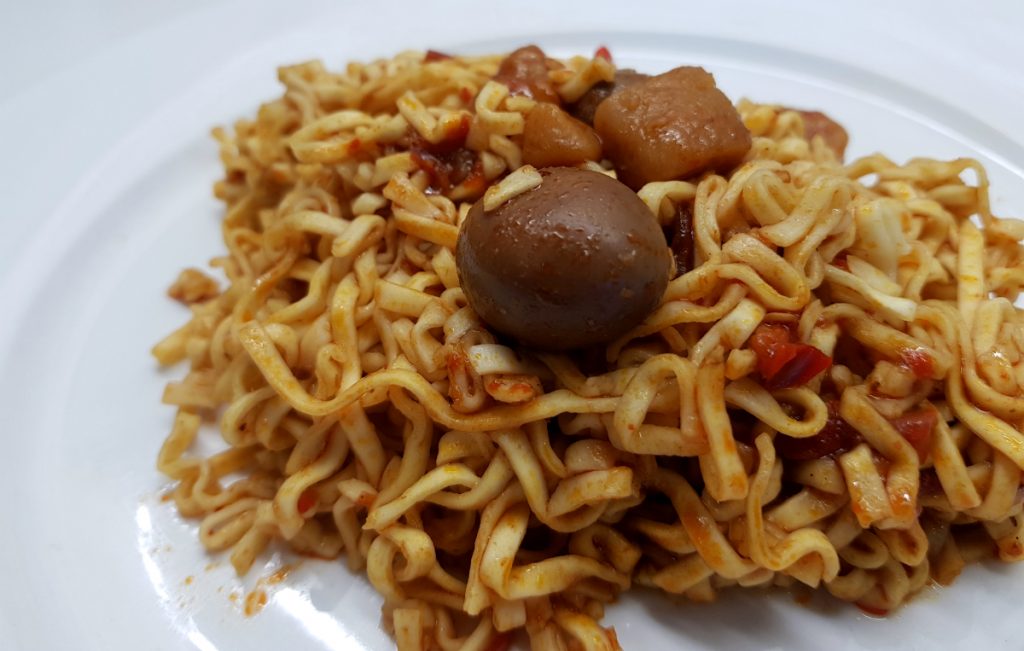 I actually had to force myself to eat the second Quail egg; it was difficult, I hated it, and I almost threw up. But I did it. I finished the whole dish; I will never eat this again.

Well the regret wasn’t too bad in the evening; a lot of gassy movements that didn’t really smell that great. I was thinking about a 3 at this point. I had a good nights sleep.

Next morning was a bit of a different story; stomach pangs and a rush to the toilet. Nope; nothing. I hope this doesn’t interrupt my drive to work.

Well, I got to work safe and sound…but then the stomach started churning again; straight to the bathroom and I produced a rapid, slimy exit; sting was minimal. Really wasn’t as bad as I was expecting.

I’m gonna go with a 5. It’s not the best feeling in the world but it’s not too bad really.

What the hell? Who the fuck puts a quail egg in an instant ramen? Why? Indomie have you gone mad? Look, I was some what intrigued by this but as soon as I plopped (Yes, plopped) an egg from the sauce sachet, I knew I was about to have a bad time. The flavour? Not nice, I can’t even figure out what it’s supposed to taste like. I was hoping for mi goreng flavour tried and true; however, it had the taste of off Quail egg. Heat was pretty non existent and I actually enjoyed what I think were potato chunks.

The Quail egg was painful, I made the mistake of cutting one in half and I didn’t like what I saw. I tried it first and a couple of casual dry reaches was able to put it down. I stammered my way through more ramen until Kam said we should just get it out of the way. I put the remaining 1 and a half eggs in my mouth, instant regret. Dry reach, chew, dry reach – people in the break room moving away in fear of me throwing up on them – this was disgusting, Indomie, you have taken our idea of ramen labs and gone mad. Stop! Don’t do this anymore! Ever! Don’t! That’s a bad Indomie!

I thought I was safe with this, I got home, did my after work business no muss, no fuss. It got to bed time (10ish PM) and the tummy started gurgling A LOT. I chose to ignore it, out of sight out of mind right? It got to morning, the tum was feeling stable, which was nice but 1 morning coffee later I feel poked the beast.

There was a very immediate rush to the bathroom I don’t think I have ever removed my pants with such an urgency. I parked my keister on the porcelain and the fury began. A very wet deep gaseous roar appeared to be some form of battle cry as my typically bright white toilet bowl was smeared with an even coating of brown. This was a nightmare, I got ready for work, I got in my car and the rumbles began again. there was quite a rush to work, and a rush to find an unoccupied stall – I swear this is the only time stalls are in short supply. Same story again, just a tap turned on full. My body is definitely craving electrolytes, my stomach is still unsettled. Real meat apparently means real regret

8 – Boy, am I going to clear some worlds in Mario Run with the amount of time I shall be spending on the toilet..