So, I have had a few days off from the reviews, moving into a real life house took my focus away from what was important, Ramen Regret.

What better way to get myself back into the full swing of things than what is claimed to be the hottest instant ramen on the market. Let’s start with the making of the bowl of lava. Noodle cake: fantastic, good choice of noodle here, nice thick noods excellent size for our bowls; can’t complain here.

Additions: The sachet of veggies, very good, had chives, dehydrated mushrooms and what I am pretty sure was dehydrated beef bits, Fantastic! Chilli sachet: Wow, A lot of chilli in this sachet, the smell alone was enough to make me question whether or not I should have been born.

Eating these noodles is a lot like a spontaneous visit to the core of the sun, more than likely had reasons in doing it but as soon as you’re there you have to wonder what lead you to make such poor life choices. First bite you think to yourself, eh, nothing too serious going on here but slowly but surely the heat builds to excruciating levels. The mouth gets more and more blasts of what I can only assume is straight from an active volcano. The lips hurt, the throat hurt, even the face starts to hurt.

Sweat would pour from every pore of your face as your poor stomach cries in the corner like a child after a beating. The rush of endorphins left me feeling like a space cadet on his way back from visiting the sun. This was BRUTAL. Delicious, very tasty dish, when I could taste it, great add in’s, just, overpoweringly hot.

Well, I got home and I was still very spacey; I wasn’t home long before my first visit to the throne. It took some pushing. I knew it was there but just didn’t want to show its face; we had a demon child. I forced away and low-and-behold I was free; or so I thought.

An hour later, the stomach gurgled, I knew this was it, this was how I was going to die. I rushed toward the toilet, and wow, I painted my brand new porcelain brown; I preferred when it didn’t want to come out, at least then there wasn’t a stingy, stinky mess. I wanted there to be no regret, more than anything, I wanted to give these the stamp of approval, but this was quite possibly the stingy-est spray-iest regret I’ve had. I regret everything, not only since the day I was born, but the day I was conceived, I regret everything that led me to this point.

I still couldn’t feel my face an hour or so after eating this. These were goddamn delicious, but just like when you’re trying to drown someone they will fight you the entire time, clawing and scratching at you until the end where you’re left panting, sweat dripping down your face, and a confusing erection. The broth was……. painfully slow to slurp down, the molecules of tasty taste mixing equally with the molecules of burny burn. However, I persevered and my prize was to sit in an endorphin-filled stupor, while an angry beast prowled in my gut. This was going to be rough.

I got home, and decided I couldn’t take the suspense any longer. My wife wasn’t home yet, no-one could hear me screaming, and I had ample time to enact any cleanup/dabbing required. So I brewed myself a double-shot coffee, and let that do its work. 1 hour later – it was time for Steveatoa to erupt, and erupt I did. One long, seemingly endless stream of hot, stingy lava erupted from me – giving almost literal meaning to the saying: tear a new asshole. However, my coffee gambit seemed to pay off, with the majority of the evacuation being done in one sitting, with only a small aftershock to follow a few hours later.

We have been waiting for these ramen for a long time; there was no preparation we could have done for the pain. The noodle block is great, the vegetable are plentiful, and the flavour is spot on; these are delicious. The problem is they are just so goddamn hot. The heat isn’t too bad while eating the noodles; its a slow build with more inner mouth sting than outer. Once I got to the broth it was a different story; I have never had a broth this spicy. Long and careful pauses between each mouthful; immense pain as the hot liquid touched my lips with each slurp. Sweat dripping from my head. Oh god. But so delicious! This was my head after eating:

I actually thought I was doing OK; no regret at all. I had reports my associates were experiencing burning but I was feeling the opposite; I was actually having trouble pushing one out. Just as I was about to carry on with my evening the stomach cramps began. Oh dear, is this it? Nope. Nothing’s coming out. I went and laid down and had a few gassy exits; one…two…the third sounded different. Back to the toilet. Nothing but a few squirts. This carried on most of the evening. Stomach pains telling me I needed to go, but nothing. About the 4th or 5th toilet visit there was a little relief, and some burning, but nothing plentiful. This is the worst type of regret. Wasn’t until midnight when things settled down enough for me to attempt sleep. Next morning was mostly clear until I got to work; stomach was doing churns by 9.15am so I headed straight for the bowl and the movement was swift and watery (with minimal burn). I think it’s all out of my system now. Much like listening to a Post Malone album, the entire evening was “Oh almost…is this going to be it?” with nothing of substance ever really materialising.

I’ll give this 8 flames. The worst part of this regret was the constant torture with no real endgame. Ruins an evening. 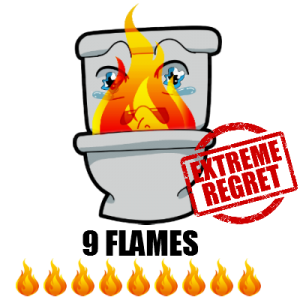